Your TLC Staff wishes you all a festive, reflective, memorable Thanksgiving 2022. We are thankful for you and for the many ways that you generously support your Church, the Church where everybody’s welcome.

The first permanent European settlement in the new world was at Jamestown. The English settlers, all men, arrived and established the colony in 1607. Some 13 years later the Pilgrims arrived in Cape Cod. On December 18, 1620 they would dock at Plymouth Rock.

What was the most striking similarity between the settlers in Jamestown and the Pilgrims in Plymouth? Human suffering and hope. In Jamestown more than half of the settlers died of famine or disease. In fact, after eight months in the New World there were only 38 of the original 104 still alive. In 1608 a ship would arrive in Jamestown with 90 single women. This was an effort to ensure the permanent settlement of the colony.

Up the coast in Plymouth, only 44 of the 102 Pilgrims who landed at Plymouth Rock in 1620 would survive to that fall of 1621. Only five women were left when the Pilgrims paused for a three-day holiday to give thanks. Imagine if 60% of us died in the next year, would we, could we, pause to give thanks?

The historian H.U. Westermayer writes:
“The Pilgrims made seven times more graves than huts. No Americans have been more impoverished than those, who nonetheless set aside a day of Thanksgiving.”

Thanksgiving is a verb, like jogging, like walking or swimming. It is something that we do; we give thanks. We pause and look around, and with eyes wide open we realize just how blessed we are. To give thanks is to acknowledge our dependence upon God and each other. We give thanks for gifts that have come to us by the grace of God and the labor of others.

A life marked by thankfulness is a beautiful thing. People who are thankful are just the type of people that we want to spend time with. The best things in life are free, and we are surrounded each day by abundant blessings.

Irving Berlin, the Jewish Immigrant who grew up in poverty in New York City, had it right, “Got no check books, got no banks. Still, I’d like to express my thanks, I’ve got the sun in the morning and the moon at night.”
So, what are you thankful for in 2022? I am thankful for you.

Blessed to be a Blessing!
Pastor Jim 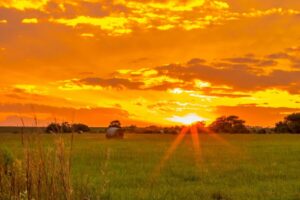