A Word from Pastor Jim…

40 years ago today, I was at a rehearsal dinner for a wedding that would take place on July 10th. Now, I have officiated at hundreds of weddings; in fact, I have one this afternoon at Bush Point. In the last decade I have had the privilege of walking two of my daughters down the aisle. I have calmed nervous brides and encouraged anxious grooms. On occasion I have been called upon to assist aging grandparents, coax tiny flower girls down the aisle, and referee divorced parents who forgot that the day was not about them. I was asked to jump out of a plane for a couple who really wanted to take the leap. A flight with no frequent flyer miles, I said, “No.”

Hundreds of weddings. Would you like to hear my rules for weddings? I only have one rule: the couple must choose their own vows. It is all about the vows, sacred promises exchanged before God and honored guests. Besides that, no rules; it is their wedding not mine. The groom arriving by float plane? No problem. Dogs in the ceremony? No problem. The rings delivered by a motorcycle loudly racing down the center aisle at TLC? No problem.

The wedding 40 years ago was a little different. You see, it was my wedding. After four and a half years of dating, Felicia and I walked down the aisle at First Lutheran Church. Holding hands in front of the altar, we promised to face the future together. We were young Dekalb High School sweethearts, and I can say, with all confidence, that we had no idea what we were getting into. When we arrived in Florida for our honeymoon, Felicia had second thoughts; I arrived with only the dress shoes from the marriage ceremony, and spiked golf shoes. That’s all.

Where did those 40 years go? Three children, five grandchildren, miscarriages, surgeries, suicides, caring for and burying parents. Homes and cars have come and gone. Money has been made, spent, and lost. Better, worse, richer, poorer, in sickness and in health until death parts us. I can say with complete confidence that we had no idea what we were doing!

I won the lottery 40 years ago. I married up; Felicia got the Lindus diamond and the curse that came with it, a man who brings only golf shoes on his honeymoon.

I am headed to Bush Point to officiate at a wedding. I will see you tomorrow. 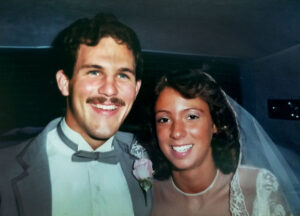