When Life Gives You Green Tomatoes…

I enjoy harvesting veggies from my garden this time of year — a reward to labors during spring and summer. Usually, I have buckets of various red tomatoes: plum, Roma, heirloom, cherry tomatoes, beefsteak, etc.  We enjoy them in salads, sandwiches, and then I can the surplus in the form of homemade tomato sauce. 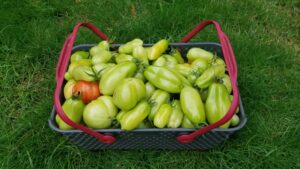 This year I had the usual volume of tomatoes, but except for the yellow Sungold cherry tomatoes, they were almost all still green. With dropping temps and heavy rain, they needed to be picked that way. I have discovered that green tomatoes are the new zucchinis of the garden– you can’t give them away because everyone has a surplus of their own. I still had buckets and buckets of them.

I couldn’t help thinking that a harvest of unripe tomatoes is like the proverbial ‘when life giving you lemons…’ adage, which advises to make the best of what you have.

I expected red tomatoes. I got green ones. After some YouTube research on what to make with them, I decided to make salsa verde (green salsa).

Eight hours later, and with a sore wrist from chopping, I had quarts and pints of salsa verde sauce to use over the winter and to gift to family and friends.

Was it exactly what I had hoped for when I planted the tomatoes? No.  But there is satisfaction in the ability to pivot and to be creative and find enjoyment in trying something new and unexpected. And I’m actually beginning to like the taste of salsa verde.