“Here’s the church, here’s the steeple. Open the doors and see all the people.” Well, something like that. Eventually it gets to the people and thus the “church.” Luther once said – among a whole lot of other things
– that God works through Means; Word and Sacraments are God’s Means of Grace; how God gets to us. But it takes people to convey that Water, that Wine, that Bread, together with that Word which spells out the Gift of forgiveness, belonging, discipleship.

I write this to express to you, called people of Trinity Lutheran Church, my family’s Thank You for last Sunday’s Celebration. We went home overcome with wonder! (I did listen to the sermon. But I still wonder where my cell phone is). Back in seminary days Greek class I learned the word for the Holy Spirit is of the feminine gender. Remember Luther’s point; the Triune God works through people to get to us. I think of three women as the form of the feminine Holy Spirit at work in our life story.

First. The Call to Whiteﬁsh, Mt. in the fall of 1964. We were in Nevis at the time, hanging around sponging off our parents’ goodness, when the Call came in the mail. There was no interviewing in those days. The Bishop recommended to the Call Committee, they did a paper-shuffle and made a decision: Hanson. They had done this seven times with seven experienced pastors (I was a 28-year-old fresh seminary grad). Over the spring and summer each of those seven said “No thanks.” Now it was nearing fall, Sunday School was starting, they had one dice (lot) in their hand and it was mine. So, they mailed it to a box number in Nevis, MN. The president gave it three days to get there and then phoned my parents’ number asking for me. I was not there so he asked if I had gotten the Call in the mail. She said “Yes,” then added, “He’ll be there!” My Mother – Holy Spirit? – sent her last late-born son to Western Montana! Yes, she did!

Second time. After 12 years in Whiteﬁsh, the national church had gone business-like and instituted interviewing possible candidates for Call. Sandpoint, Idaho phoned (no cells yet) inviting me and Jeri to come and visit with them. We accepted. An interview did not mean being anxious to move. Mark and Karyn stayed with friends; they were in 4th and 5th grade. While Jeri was being hosted (sized up) by the wives, I met with the Call Committee in a comfortable library lounge off the kitchen of the church. When they had asked all their questions and I had my time, I was excused. I went into the kitchen for another coffee. An elderly woman was tidying up. She looked up, introduced herself and then said, “So you are our new Pastor!” I modestly replied, “No. I’m just ﬁnishing being interviewed in the library. I’m not your next pastor.” She looked at me and said, “That’s what you think. I’ll see you again when you move in,” turned and walked out. I thought, could she have been the feminine form of the Holy Spirit? Oh my. She was. We moved in May.

Third time. Nineteen plus years later, Anacortes was in a pastor-search mode. They had had some difficulties, as can happen, and thus were a bit discouraged and disheartened. A member of the Call Committee – a woman, right – was in Bellingham visiting a friend in the hospital. On the elevator she met a pastor of one of our churches. They talked a bit. She shared her worries about ﬁnding a pastor. He casually mentioned my name. He had served in Montana years ago. The elevator door opened and they separated. She went home and at the next Call Committee said, “I want to place Dennis Hanson of Sandpoint, Idaho on the candidate list. I don’t know anything about him.” They did. We were invited to an interview. When the couple came to show us around the town, I almost fainted; she was a twin of my sister Thelma – right down to the collection of assorted buttons on her coat. Two women – means of grace? – We moved in May. Common, ordinary people. And to top it off – each and every time that feminine expression of the Holy Spirit nudged Jeri to say, “Time to go…..”

Now the irony of Sunday morning, second service. We were passing the peace. I looked up and there stood a young woman in front of me. She whispered “Julie Leverson.” Whiteﬁsh days. She was about 4 years old when we moved there. Her dad was president of the congregation and chair of the Call committee – the one my mother told “he’ll be there.” Our ﬁrst night was in their home for supper. The mover from Minnesota had arrived earlier with our stuff, couldn’t get into the house so dumped everything on the lawn and left town back to the safety of Minnesota. Mike got us moved in and said, “Come and eat with us.” Julie was there with her four older brothers and sister. Sunday she and her husband came here from their home in Olympia. It felt like our pastoral life had come full circle.

Here is the Church, the people. You. Another Greek lesson: the word “you” in the New Testament is usually, if not always, in the plural form; “you” together are the church and “you” together were a Means of God’s Grace in our continuing belonging, working, living, raising grandkids, loving our home and our place among you here at TLC, Pastor Jim and the whole bunch called “staff.” For those beautiful cards and kind thoughts; for all of that and more we thank you.

See you Sunday.
Dennis and Jeri 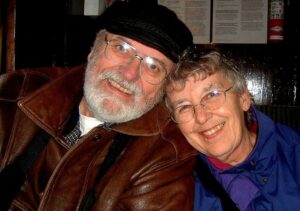