…we weave notes together to form the fabric of our community’s praise and lament; each of us offering a unique and invaluable thread. Anonymous

Smart is good. Smart and hardworking is really good. Smart, hardworking and fearless, that’s the hat trick. …are you strong … enough to become who you might be were you not afraid? Author, Anna Quindlen

Father Nigel Weaver and I have struck up a remote friendship, based partly on our appreciation of the journey of faith, rebirth, calling, and our human need or wish to express those things in our own understanding. We haven’t met, and probably never will, but we have tacitly agreed to hear and honor each other’s understanding of these concepts and see where they lead.

Let me back up a bit. A couple weeks ago I left you hanging at the end of a missive, looking forward to the second Sunday of Easter. I led up to a song I had written, then didn’t let you hear it! So, now it’s time – it’s Easter!

A while ago, as I was researching music for the upcoming Easter season while deep in the midst of the dark Lenten season (a feature of a church musician’s life, and pastors, too, for that matter), I recalled a song I had written in 2018, The Risen Christ.

I had found the lyrics in our ELW hymnal (#390), and was moved by them, which led to the new melody and new song. But as I played through it, as understandings change, I was no longer completely satisfied with what I had written. So I edited the song, added a refrain and a transition, and, voila!, a new version appeared.

Since I had added to the original poem/hymn text and was going to present it online, I felt I needed to ask its author for permission to use it. After locating Nigel at St. Philip’s Anglican Church in Toronto, he said he was fine with my use, but was a little hesitant about my addition of a refrain. In my earlier missive I wrote “Standing on his shoulders, I finished and recorded the song and sent him a copy. So far, (I’m not too worried) I haven’t heard a word from him. It must have landed in his junk folder! I just trust…”

Last Saturday, three weeks after sending him the music, the night before it was going to be in the Synod service, I got his response. He wrote a page and three quarters… to say eventually that he was “thoroughly delighted” with what I had done with his text. Whew! Fr. Nigel is a lover of language, and intricately explained how his lyric talked of the “then” of verses 1, 2, and 3 (the reporting of Jesus’ and the disciples’ interactions following the resurrection) and the “now” of verse 4 [the prayer and, for me, the call to action for the faithful (us!)]. Here’s the text:

The risen Christ, who walks on wounded feet from garden tomb through darkened city street,
unlocks the door of grief, despair, and fear, and speaks a work of peace to all who hear.

The risen Christ, who stands with wounded side, breathes out his Spirit on them to abide
whose faith still wavers, who dare not believe; new grace, new strength, new purpose they receive.

The risen Christ, who breaks with wounded hand the bread for those who fail to understand,
reveals himself, despite their ling’ring tears, enflames their hearts, then quickly disappears.

May we, Christ’s body, walk and serve and stand with those oppressed in this and ev’ry land,
till all are blessed and can a blessing be, restored in Christ to true humanity.

I was a bit worried about his reaction to the added refrain (but, what could I really do…it was already recorded and gone!). Here’s the text of the refrain:
New hope among us, alive inside, gives us the strength to carry on and let this love abide.

It comes after verses 2, 3 and 4. His engagement with the journey of the whole text, including the refrain, and how we respond to it, let me breathe a sigh of relief:

The “May we” of verse 4 is not bold assertion, it’s the yearning of the latter half of Romans 8.
For me your Refrain strengthens the continuity/connection of the “then” and the “now” which is in many ways what the text is about. It very much resides in those concluding verse measures. For me, they kind of leave me, [like the] disciples at the transfiguration [in an]… “it’s good, Lord, to be here” place. Then the Refrain immediately takes us to a “back to business” place. A business which is not ‘our enterprise’.

There was much more insightful examination of the lyrics—his “thank you” would have been enough—but I’m honored to have added my thread to Fr. Nigel’s already brilliant threads to create this song, The Risen Christ. May we be strong and bold enough to live verse 4. 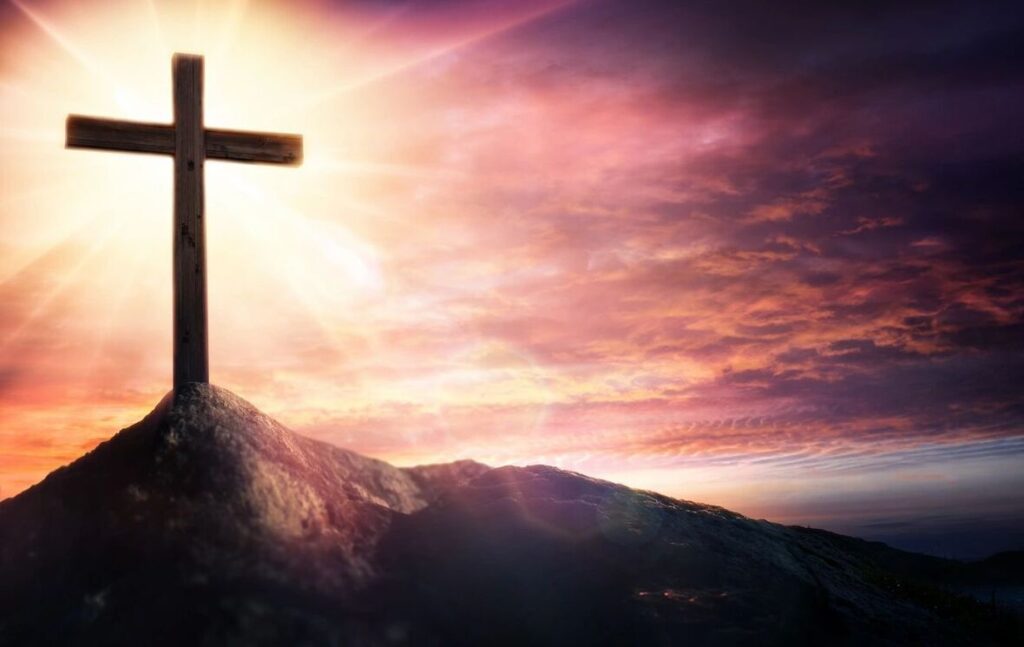