The Nobility of Longing

No one has ever accused me of being noble. Nope. Been accused of lots of things – selfish, talks too much, really sad golfer, doesn’t listen (who does?), insensitive (“Siri, why have I had trouble with women?” “This is Alexa.”)… you know, the usual stuﬀ. But noble has escaped my personality bio. Actually, when was the last time you ever heard anyone being described as noble?

Which is why a line from a recent read caught my attention. Cyprian Smith O.S.B. (Benedictines) has written a challenging book, “The Way of Paradox,” focusing on the theology of Meister Eckhart, an early 14th century mystic. Now, lest you accuse me of some kind of spiritual snobbery, keep in mind I balance Father Smith’s writings with an equal portion of Dilbert. No surprise there.

Father Smith writes, “… we should remember the great nobility God has put into the soul, so that man may come miraculously to God.” That line absolutely slayed me. You see, my imagination has long been held captive by a verse in the 3rd chapter of Ecclesiastes, “… He has set eternity in the hearts of people; yet they cannot fathom what God has done from beginning to end.” I have found solace in the notion that God created us to yearn for God’s self. Even in the midst of our human depravity it has been, for me, a source of encouragement to believe that ultimately, we all will turn to God because that’s how we were created. Maybe, for some, that will only occur at death (read, God’s grace still is in place).

Yet, never have I thought of that Godly gift of creation as nobility. Isn’t that an amazing observation! Our yearning for God is a sign of a holy nobility we have been created with. In all the expanse of the universe, despite the millions of light years creation has been in the process of evolving, regardless of every speck of carbon that went into the creation of every living molecule anywhere in all of the universe, we were graced with a gift of nobility that has inspired us to miraculously come to God. God created us worthy, noble. We should feel chosen, all of us. Every one of us.

Dumbfounded I am. No one has ever, ever accused me of being noble. Can’t wait to tell Brenda. Take that, Alexa! Ha!

Well… lest I stray too far with this little epiphany, context is again everything. Meister Ekhart’s spiritual insight about God’s gift of nobility placed within our soul is about God’s grace, entirely. Not anything inherent in our behavior. God’s grace is what inspires us to seek God in the first place. This leads me to again muse over Luther’s meaning to the 3rd Article of the Apostles Creed: “I believe that I cannot by my own understanding or eﬀort believe in Jesus Christ my Lord or come to Him. But the Holy Spirit has called me through the Gospel, enlightened me with his gift, sanctified, and kept me in true faith.”

Nobility, it’s a God thing. It is, though, an amazingly humbling thought… our coming to God is the consequence of a nobility, a value, that God placed within our soul that has led us to long for God. Wow. Okay, back to Dilbert.

Be at peace, we are loved. Feel free, if motivated, to drop me a note. 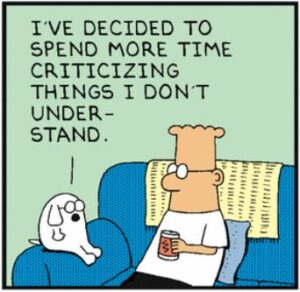