Some of you may remember my friends Ole and Lena, Hittite family in the Midwest. The Pandemic has been hard for them, too. Along with the sad part of the epidemic, friends ill and some dying, no funerals and no gatherings on Sunday for worship, there is the boredom side of watching Wheel of Fortune and Jeopardy reruns, facing summer without baseball, and perhaps a fall without football.

Pastor Trygve has been working very hard staying away from people, yet being available. Everything is online, of course, and he has a hard time convincing himself, when taping the Sunday service, he really is not preaching to an empty church, but the echo in the building as he talks is hard to ignore. Anyway, he is challenging his parishioners to read the New Testament in this “season.” But in a new way: Not in the order found in their Bible, but in the order of when each book/letter was written, according to the Oxford Annotated Study Bible dates. He read his NT this way back in the season of Lent.

You may ask, as Ole did, “What’s the point of this anyway?” Pastor Trygve tried to explain how the Apostle Paul’s letters were the oldest, and the rest, including the four Gospels, came later; all between the dates of AD/CD 50-100. Jesus’ death, resurrection and ascension fall in the AD/CD 30-36 period. Paul is beheaded in AD 67. Mark, the earliest of the Gospels, is dated – AD 67-70. You, like Ole, might ask, “So what? I’m happy with Christ in our Home” or you, like Lena, might think, “We’ll give it a try,” which is how Ole and Lena started reading the NT as “The Evolving Word.” They were given the attached chart to guide them.

Athanasius (Google it) chose these 27 documents and brought the list to a Church Convention in AD 367. They adopted the list as the official canon of scripture along with the already received Old Testament, and thus, our Bible. 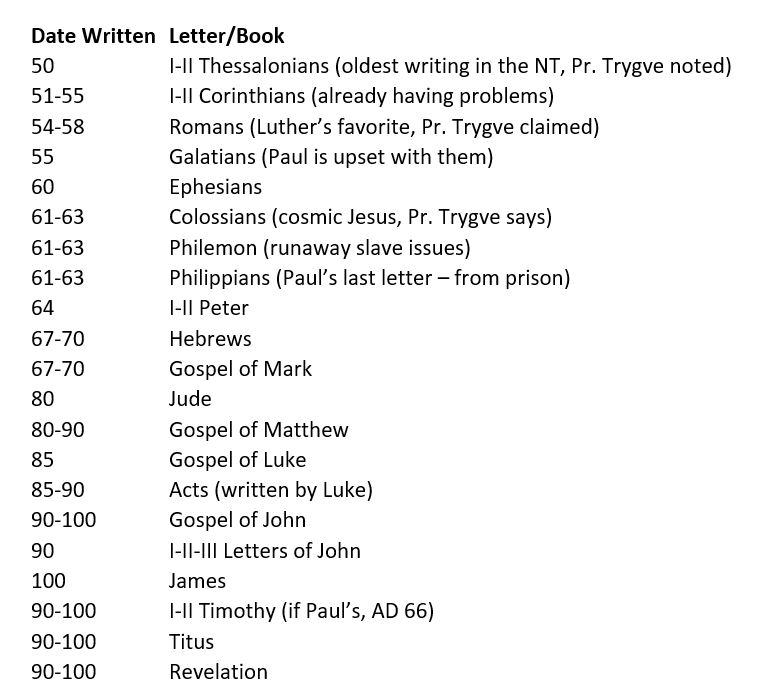 No word yet on how Ole and Lena are doing, or how far they have gotten down the list of The Evolving Word.

To make a donation to Trinity, follow this link: https://trinitylutheranfreeland.org/give/