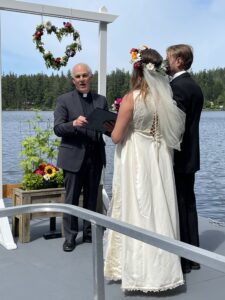 It was a beautiful Thursday afternoon on Whidbey Island. June had arrived, the sun-bathed green landscapes were accented by blooming flowers and the ever present yellow of scotch broom. In a brief four-hour period, I would take part in, and witness, new beginnings and bittersweet endings.

My arrival at the wedding site brought warm greetings and lavish hospitality. There would be time for celebration, but I had to be all business in my business suit and clerical collar. There were a dozen little details that had to be addressed if the ceremony was to come off without blemish. Photographers, DJs, mothers, a groom with his father, the wedding party, and two, cute as could be, flower girls were assembled and in position. It was time to start. All I needed was the bride and her father. How long they had dreamed of this walk down the aisle.

When she answered my call and emerged from the dressing room, she was resplendent, glowing, wearing a gown that had graced her mother’s wedding, a gown that her grandmother’s imagination had called out of lifeless bolts of material decades ago. Weddings were rarely emotional early in my career, but with three daughters, and having made that slow walk down the aisle with my little girl on my arm, I am now prone to tears at most weddings.

The wedding came off without a hitch. It was a magical day on a dock, the end of one chapter, and the beginning of a lifetime of new beginnings.

The wedding was over, the license was signed, and I was off to the Trinity Preschool Graduation. The ten who were graduating had weathered the pandemic school year, and now walked the aisle as Pomp and Circumstance played. Parents, grandparents, and siblings held cell phones to capture the moment for posterity. Though they had practiced earlier in the day, the mostly 5-year-olds acted like 5-year-olds; as if to say, that it was perfectly controlled chaos, just as it should have been. Teacher Michelle interviewed each student, as the gathered guests gained some insight to the Preschool experience. Much like the NFL draft, there was an announcement that informed the adoring family members and friends of what kindergarten team the new graduates would be a part of next fall. 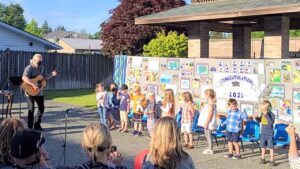 The students, many of whom had been with us since they were two years old, would not be returning. They would be moving on; we would not see their smiling faces or bandage their skinned knees anymore. My grandson Camden was among the graduates. He will no longer bounce into my office and up into my lap three days a week. Next fall, when the preschoolers sing in the meadow at the end of the school day, there will be no one for me to pick up. Bittersweet indeed.

The graduation came off without a hitch. It was a magical evening that ended with the students lined up for shaved ice treats. It was the 35th Graduation of the Trinity Preschool, the end of one chapter and the beginning of a lifetime of new beginnings.