I Am the Vine… You Are the Branches

As I did morning slug patrol in the garden, vines of tender, unfolding grape leaves caught my eye. A long-ago memory came to mind – along with a hankering for dolmas.

I was a freshman in a Christian college in Northern California above the Napa Valley, way on the other side of the country from my home in upstate New York.

I can’t quite remember whether I was invited to one of the religion professors’ homes because I was in his Old Testament class or because my then-boyfriend was a theology major and was in several of his classes. But there we were, in his dining room with six other students enjoying a Sabbath lunch. After a year of cafeteria food, a home-cooked meal was a definite treat.

Professor Niels-Erik Andreasen was a popular professor, though a bit reserved and soft-spoken – traits which are emblematic, I’ve come to realize, of most deep-thinkers. Born in 1941 in Nazi-occupied Denmark, he went to college in England, then seminary in Berrien Springs, Maryland, at the same University that he would later lead for 22 years as president.

His wife, Demetra, was from Athens, Greece and a social worker by vocation. She was also soft-spoken but exuded a warmth and outgoing nature that was a good balance to her husband’s Nordic reserve. 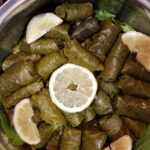 Among the Greek dishes she served were stuffed grape leaves – dolmas she called them. They were delicious and so very different from anything I’d ever eaten before.

“How do you make them?” I asked as I helped her wash the dishes.

“Come over Thursday afternoon after your last class and I’ll show you,” she said.

We spent the late afternoon in her backyard where she showed me how to pick the most delicate grape leaves of just the right size and then blanched them. She proceeded to make a vegetarian filling of rice, finely chopped mint and parsley, raisins, cinnamon, olive oil, pine nuts, a squeeze of lemon and a little cumin.

Then she carefully scooped a tablespoon onto the grape leaf and tightly wrapped it into a little bundle, seam-side down. I spent an hour practicing the grape leaf roll-up technique while listening to stories about her childhood and how her mother had taught her to make dolmas in Greece. She also asked me about my background and how I liked college and what my goals were.

We lined a large pot with layers of the grape leaf bundles, put lemon slices on top and weighed them down with an overturned plate. After covering them with water, we let them come to a boil and then simmer for 40 minutes. Next, Demetra taught me how to make a Greek avgolemono (egg and lemon sauce) to dip them in. 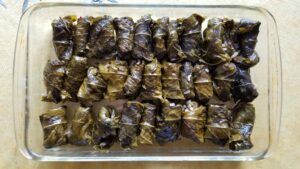 Finished, we sampled a few dolmas to savor and critique our creation, while saving the bulk for her next student Sabbath luncheon.

As I was getting ready to return to the dorm, Demetra pulled a hand-embroidered linen table runner out of a drawer. Her mother had embroidered it with cross-stitches of green grape leaves, purple grapes, and a gold border. It was lovely.

“Here,” she said, placing it in my hand. “Something to remember our cooking lesson.”

Looking back, I cannot recall a single Old Testament lecture truth that stuck with me from Professor Andreasen’s class. When I see grapevines, however, I often think of an afternoon filled with dolmas and laughter.

For it was Demetra, the professor’s wife, who taught me that kindness, rather than facts, often provides a more enduring lesson.