By the time you read this, Brenda and I will have experienced the Andrea Bocelli concert at the completely remade Key Arena, now known as Climate Pledge Arena. The last time I was in that arena it was to watch the Seattle Sonics go down in defeat to the Houston Rockets. It was game seven of the 1997 NBA playoﬀs. Ten years later the Sonics were absconded by some Oklahoma zillionaire and the Seattle Sonics were no more. Faithful basketball fans are hoping the new arena will be enough to raise up a new iteration of the SuperSonics. So, I am looking forward to experiencing the ambience of the new arena.

Okay, now what was this about? Oh yeah, the Andrea Bocelli concert.

I guess the Sonics and Key Arena was a bit of a sidebar. Ha! Imagine that, I got lost in a tangent about a refurbished building and a lost basketball team and forgot about the point of my little share – I get to experience one of the greatest, most amazing talents of our age. Shoot! Isn’t that how life goes?

You get married to the love of your life, prepared to honor your vows with joy “as two shall become one” and before you know it, you’re arguing over who is supposed to empty the dishwasher. Keeping score becomes a marriage dance. It all becomes a win-lose proposition. So much for marriage intimacy.

Committed we are to live a healthier lifestyle and to eat our way into better health numbers. Before we know it, though, a bag of Oreos shows up in our shopping cart and the demands of our hurried lifestyle excuse our decisions, as choosing to no longer supersize the fries has now become the standard for discipline.

You get the idea. We all know how it happens. Preparing to go to the concert of the year (of my life?) featuring one of the world’s greatest musical talents and I’m thinking of a building (it wasn’t great) and a basketball team (they were good). Yet, Andrea Bocelli will undoubtedly be utterly amazing.

Okay, that’s it. I kept it to one page, brevity is not one of my strongest gifts. I’ll fill you in on the concert later… (it’ll be wowzer amazing!)

Thanks for your loving support as together we serve in Pastor Jim’s absence, 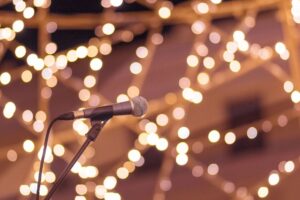