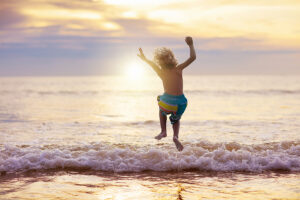 Today’s Word from Pastor Jim…
.
Just days before Brenda’s funeral, Felicia and I invited Pastor Tom over for dinner at our middle daughter’s beach house. The old preachers sat on the deck sipping a glass of wine, as Felicia lovingly prepared a meal. We mused upon creation as we watched a beautiful but broken world float by. The man next door was renting the Airbnb for the week; we said hello and I took him a couple of slices of bacon. Pastor Tom was in and out of grief, we shared a few tears, some precious memories, and shared stories of our children and grandchildren.

It was then that our new friend, Derrick, now out of bacon, walked over with a glass of wine to join in the conversation. He was on holiday from London; he worked in finance and had a second home in Spain. The exchange was lively; Felicia slowed down dinner and took a call from a daughter.

Forty minutes later Derrick found out that he was visiting with a couple of pastors. “So, you are both Luthtarians?” Close enough. Derrick continued the thought, “Well you must know that I am an atheist.” This was not surprising given the fact that less than 1% of the British population attend church.

How to respond to an atheist?

I said, “Listen Derrick, you need to understand, Tom and I have given our lives to the church and the pursuit of truth. We have over 70 years of experience in the parish. We have seen it all; we have impressive degrees, we have read countless books, and sat at the feet of brilliant theologians. We are professionals. And we know… NOTHING!

“All we know for sure is that God loves us, God is not to be feared, and we should love each other. That’s all.”

In the kitchen our dinner was now in danger of becoming an Old Testament burnt offering. It was time to eat. We shook hands and Derrick went back to his family. Later that evening he brought over some English chocolate and thanked us for the conversation and bacon.

Nearly 40 years ago, I had the privilege of taking a preaching class at Luther Seminary. After a distinguished career, this would be the final class for Professor Arndt Halvorson. I was young, naïve, and sure of my faith. He was weathered, wise and gray. One day after class I posed a question to the old professor. I don’t remember what the question was, but I remember his response. He said, “The older I get the less I believe with certainty, but those things that I do believe, I believe more passionately than ever.”

Jesus loves me, I have nothing to fear from God, I am called to love. Loved, forgiven, and never alone. That is my confession of faith and that is enough. It scared me a little when Professor Halvorson shared his humble insight with me and now, 40 years later, I have become a shadow of my mentor.

Jesus encouraged us to have faith. Faith like a child, for that is what we are, children.

I hope to see Derrick on the other side someday. For even if he does not believe in God, I am sure that God believes in him.