By the Rivers of Babylon

This now-famous song was composed in the 1960s by Brent Dowe and Trevor McNaughton and first recorded by their band (which also included Tony Brevett), The Melodians, in 1970. It quickly became a reggae classic. It was included in the soundtrack of the 1972 film, The Harder They Come, directed by Perry Henzell. The soundtrack was all-reggae and thus, the film was credited with bringing reggae to the world at large.

The song got a further boost in 1978 when the Germany-based pop/disco group Boney M released their cover (Brown Girl in the Ring was on the vinyl B-side). Their version climbed to #1 in the UK and earned them a platinum disc – truly amazing for a reggae cover based on texts from the Old Testament!

The song is still among the top 10 list of all time in the UK. It has since been included in other film soundtracks, including the 1999 Nicholas Cage film, Bringing Out the Dead and in 2010 in Philip Seymour Hoffman’s, Jack Goes Boating.

The song is based on passages from the Psalms:

Psalms 19:14 Let the words of my mouth and the meditations of my heart be acceptable, O Lord, my rock and my redeemer.

Psalms 137:1-4 By the waters of Babylon, there we sat down and wept, when we remembered Zion. On the willows there we hung up our lyres. For there our captors required of us songs, and our tormentors, mirth, saying, “Sing us one of the songs of Zion.” How shall we sing the Lord’s song in a foreign land?

Now it is noteworthy that The Melodians were a Jamaican Rastafarian band. I will not pretend to be an expert on either the political history of Jamaica or on Rastafari (or on anything else, for that matter!). But I can say some few things: Rastafari is considered a “new religious movement” by religious scholars. It grew out of the unrest in 1930s Jamaica among poorer and disenfranchised Afro-Jamaican communities partly in response to British rule. It is Afro-Centric in its tenants, and cries out against unjust rule. In this case, “Babylon” refers to the British government oppressing the Afro-Jamaican population. Indeed, stories from the Old Testament are common sources of Rasta belief and there is no shortage of parallels between tales of the enslavement and displacement of the ancient Hebrews and the experience of African peoples when brought to the “New World.”

In its historical context then, the song was actually quite political and was, I believe, banned in Jamaica for a time as it was protesting “captivity” (oppression) by the ruling class. And how to have peace of mind and purpose and lasting joy when basic dignities of life are denied? Just as for the ancient Hebrews and their regular captivity – whether by Syria or Egypt or Babylon – how to maintain equilibrium when treated as lesser by an oppressing or enslaving power?

My motivation for today’s song is not political, however – nor is it even religious. Besides the fact that I enjoy the song for its own sake, I am rather motivated by a more personal quest for growth and expansion of consciousness. I believe whole-heartedly that the Divine is – or can be – revealed within our very humanity. What does it mean to follow Jesus if not to follow the example of his life and his consciousness – the Christ Consciousness available to one and all?

In this light, our growth requires careful self-examination. What is the tone and tenor of our thoughts? Are we harboring unnecessary judgements? Envy? Greed or the gleaming lure of ambition? In what ways are we in fact trapped by our own personal “Babylons,” hindered by old habits of thought and behavior that are not congruous with an expanded consciousness and a loving heart? Every moment of our lives gives birth to the next moment, and the next, and the next, and the next. So, what are we doing, thinking, feeling in THIS moment? Are we free from the shackles of past disappointments and un-examined, unintentional conditioned patterns?

When Jesus said, “Lay down your burdens” I don’t think he was only talking about our known troubles. If we are to awaken the spirit of God within us, we must also lay down our inner hindrances – all the ways in which we (mostly unconsciously) lay down across the path of our own expansion and true liberation. And there is no time like the present moment to become still, quiet, and aware, to become clear in ourselves – to make the words of our mouths and the meditations of our hearts truly manifest all the truth and joy of God’s creation that we be a light unto one another.

Click HERE to listen to my version of this delightful song. 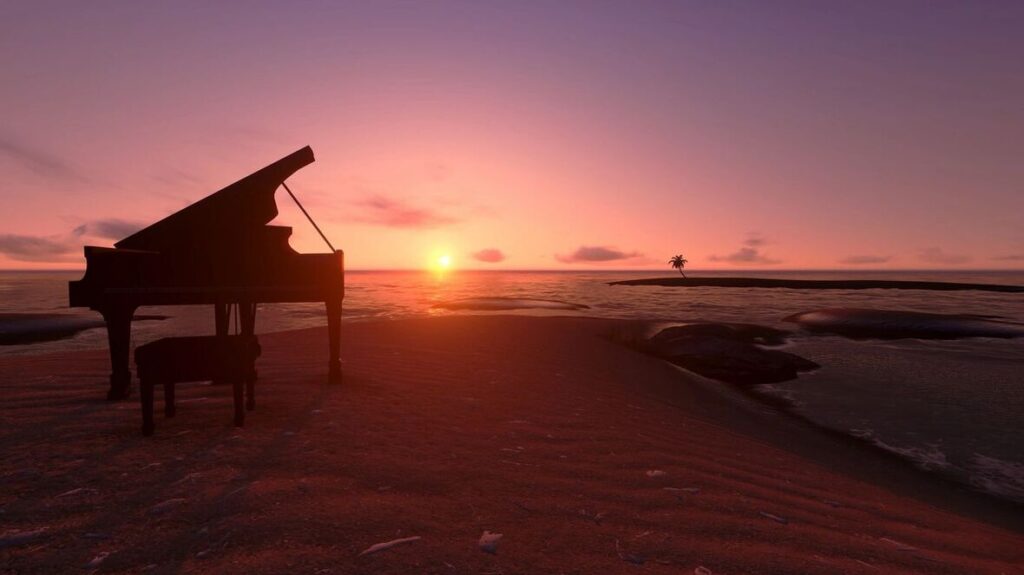