It was 69 years ago. The population of Island County was holding steady at 11,000. Dwight Eisenhower had moved into the Oval Office. Elizabeth II was crowned Queen of the United Kingdom. The Korean War had just ended. The unknown Elvis Presley put his voice on vinyl for the first time.

It was 69 years ago when a young mother by the name of Betty Lehman picked up a pen and signed that charter. Betty was number 16 out of 37. What followed was 69 years of service. Betty remained faithful for 69 years. Her twins would be the first babies baptized at the newly formed Trinity Lutheran Church.

There would be many lean and challenging years ahead for Betty and the church she loved. When church council president Pete Peterson announced the plans to build a new church on Highway 525, the building budget was $5,000.

Betty’s children grew up, grandchildren were born, she stood at graveside to say goodbye to her husband, Wally.

Sixty-six years after signing that charter, after a journey of 93 years, Betty was frail and failing. I visited her in the hospital in November of 2019. She was worried and anxious, but she told me that her faith was stronger than her anxiety. She said, “I close my eyes and say the Lord’s Prayer and I know that I am not alone.” We were holding hands now. Two hands that had barely touched in 30 years. There was a tear in her eye. She thanked me for sitting with her, she squeezed my hand and said, “I love you.” I walked to my car in the hospital parking lot and cried before driving home.

Betty died early this week, on Valentine’s Day. No more pain, no more sorrow, no more tears. She crossed over to a heavenly reunion with Wally, her dear parents, old friends, and many Trinity Saints who had gone before her.

Sixty-nine years ago, 37 people believed in TLC and that belief led to the birth of our church. Thirty-five of those 37 Charter members are gone. We stand in an unbroken line; we care for this precious gift that has been entrusted to us.

Thank you, Betty. Thank you for believing and serving for 69 years. We will see you on the other side. 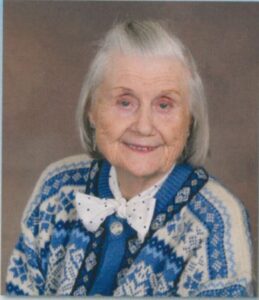