An Evening Hymn, This Morning

One of my favorite hymns, in our hymnal or any other, is an old favorite sung to the hymn tune TALLIS CANON, All Praise to Thee, My God, This Night. Part of my affection for this hymn is its straight forward, wonderful, easy-to-reharmonize hymn tune (often sung with the text Praise God from whom all blessings flow…). And besides being a good, solid tune, it can be easily sung in a four-part canon, like Row, Row, Row Your Boat, only a bit more stately! (Just ask the church choir—we’ve sung it at many retreats and rehearsals!)

The tune was written by Thomas Tallis, a Renaissance composer, considered to be one of England’s finest. Born between 1500-1520, he rose from relatively obscure beginnings to be a singer at chapel and eventually court composer and performer for Henry VIII, Edward VI, Mary I and Elizabeth I. He never lost his head during the various religious battles of the time, remaining an “unreformed Roman Catholic;” his versatility of musical styles literally saved his job and his life! In later life he received a 21-year monopoly (along with William Byrd) on writing and printing polyphonic music. The Beatles, Michael Jackson and Drake never achieved that!

Not to be outdone, Bishop Thomas Ken was the author of the text. Born in 1637, his parents both died during his childhood and he was raised by a guardian. He was connected to the Westminster Chapel, and was devout in his connection to the English church of the time, and was known as a man of great conviction and character. When Charles II came for a visit, he brought along his mistress and asked Bishop Ken to house her during his stay. The bishop quickly said his house was under repair and hired a builder to remove the roof!

During his life his willingness to hold to his principles sometimes gained him great respect and affection from monarchs, and sometimes got him fired. And yet, he persisted! He wrote many hymn texts, and is especially known for the texts for the Morning, Evening and Midnight Hymns, which have been in every English hymnal printed for the last 150 years at least.

Click HERE to enjoy this version of the evening hymn (#565 in the ELW), and note that verse two is sung in four-part canon. You are invited to sing along with this song in praise of our loving God, who protects and cares for us in all life’s many situations. Blessings on your musical journeys! 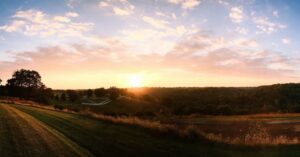